Home » News » VHIMA is Represented in Chicago in September 2019 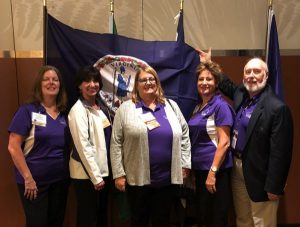 In September, five delegates from the Board of VHIMA ventured by land and by air to attend the AHIMA19 Health Data and Information Conference in Chicago, IL which was held September 14-18. In attendance were: Christina Upton (2nd Year Director), Kim Spencer (VHIMA President -Elect), Gloria Litton (VHIMA President), Tonya Deborde (1st Year Director – filling in for Kathleen Scott – Past President), and Dan Rode (3rd Year Director). The convention program was packed with many presenters and many topics so there was something of interest to everyone. There was actually more available than one person could attend by themselves. With AHIMA “going green” as many organizations are attempting to do, all the convention information was available on a app that you could download and select the presentations and post to your schedule on the app. I must admit that I still struggle with some of this technology as many of us do but we continue to move forward. The vendor hall w as overwhelming as it had so many vendors to see and many of which had presentations and demos that could take a big chunk of time for any one person so you had to be selective in what you participated in.

One major theme throughout the convention was that of transformation and how the HIM profession is changing. The work we are doing is changing, the decisions we have to make are changing, and our knowledge base is changing. We have to develop a whole new skillset to keep up with the advancing profession. One of the speakers on the first day was Carey Lohrenz, the 1st female F14 pilot in the US Navy. Carey discussed the lessons she had learned during her career in an all-male environment on leadership and diversity training. She was one of several engaging speakers who presented during the convention. Other presenters were the current and past presidents of the American Medical Association, Patrice Harris, MD, MA (current) and David Barbe, MD, MHA (Past President). The convention was closed with an awesome presentation by John Quinones (ABC News Veteran and Host of What Would You Do?).

The House of Delegates meeting was held on the Sunday prior to the convention and every state was represented. It is always a rewarding opportunity to spend time with other CSA Delegates where you can exchange ideas, discuss areas of interest and concern, and just get a chance to network. Having been at several HOD meetings in the past, I did recognize people from other CSAs that I had seen several times prior at other HOD meetings. It is always great to see and hear from many of the AHIMA leaders and hear what goes on with our AHIMA Board and its committees. It is also interesting to learn that other CSAs have the same issues and challenges as VHIMA.

I would like to thank the members of VHIMA who supported me and the other Delegates as we represented our state at the 2019 HOD Meeting and AHIMA Convention.